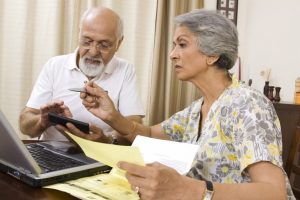 Many older Americans may be concerned about having enough money to cover their expenses when they enter retirement, as 41 percent of homeowners ages 65 and older are still carrying mortgage debt, according to 2016 data from the Harvard Joint Center for Housing Studies. The percentage of older adults who are still paying off their mortgage while in retirement has steadily increased over the years.

Some may turn to reverse mortgages, which allow homeowners to withdraw equity from their properties. But financial experts warn retirees to talk with a professional to determine whether that is the best option for them. Nonprofit housing counselors may also be able to help discuss options. The U.S. Department of Housing and Urban Development publishes a list of certified housing counselors by location.

“To pay off the debt, you’re going to have to give up some living standards,” says Craig Copeland, a senior associate with the Employee Benefit Research Institute. For some homeowners, that may mean having to relocate to a place where the cost of living is less expensive. “They may be able to move into a retirement community, where there may be a better social aspect than living in a house in the suburbs with a bunch of young people,” Copeland says. “Or they may have to move in with a relative or friend to share living expenses.”

The biggest reason people move to growing areas is usually because of better employment opportunities.…